Little Jessica's death: where were the neighbours? – opinion article by Nuno Cardoso-Ribeiro in Público

Opinion article by our coordinator in Público of06/25/2022, regarding the death of little Jéssica and the Community’s duty to protect and watch over their children. Read the article on Público’s website or the translation and pdf below:

“Little Jessica’s death: where were the neighbours?

In CPCJ and family courts there are no crystal balls to guess whether children are in danger or not. The duty to watch over and protect children is a community duty and it’s up to each and every one of us to report situations of danger that we know about and in which children are involved.

And once again we have a country in shock by the brutal death of a little girl in a yet to be clarified context where a mother is alleged to have left her daughter in the care of a third party to whom she owed money. An episode of moral misery, in the happy expression of the Republic President.

In these things, as usual, we tend to blame the State, the Commissions for the Protection of Children and the Young (CPCJ), the Prosecutor’s Office, the courts, in short, the “others”. We forget that this girl and her mother didn’t live in isolation, they frequented cafés and stores and socialized with other members of the community with whom they came into daily contact.

The CPCJ, the Prosecutor’s Office and the Courts can only act if facts are reported to them that require their intervention. If there are no reports coming from the health and school networks, the police or the community network, then these entities are powerless to act.

According to the media, the girl’s situation was reported to the CPCJ only in the context of episodes of domestic violence that she had witnessed. The case then passed to the family and juvenile court because the child’s parents did not consent to the intervention of the CPCJ. However, with the couple’s separation, the situation of danger reported to the court – domestic violence – no longer existed and the case was dropped. The court was not aware of any other risk factors that would justify taking other measures. If this version of the facts is true, there seems to be nothing to blame in the CPCJ or the Setúbal Family and Minors Court actions.

In CPCJ and family courts, there are no crystal balls that allow to guess whether children are in danger or not. The duty to watch over and protect children is a duty of the community, and it is up to each one of us to report dangerous situations that we know of where children are involved.

It is time to end this deafening silence and report cases of children at risk that we know of in our communities. Let the tragic death of little Jessica be a lesson to us.” 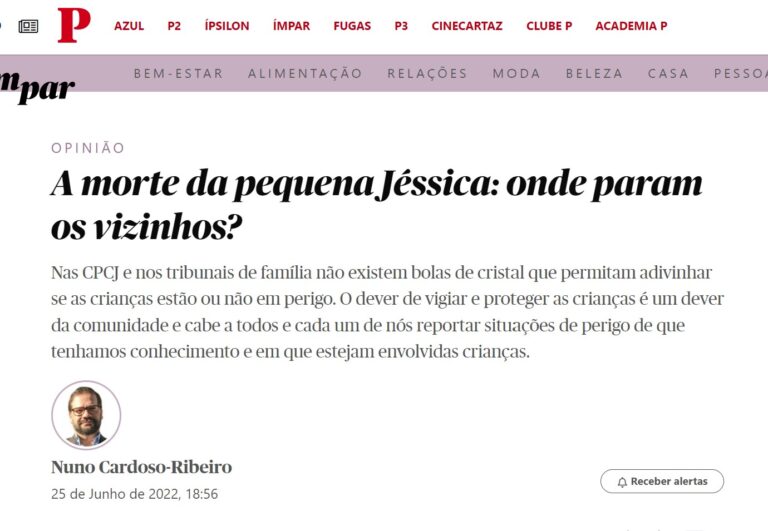 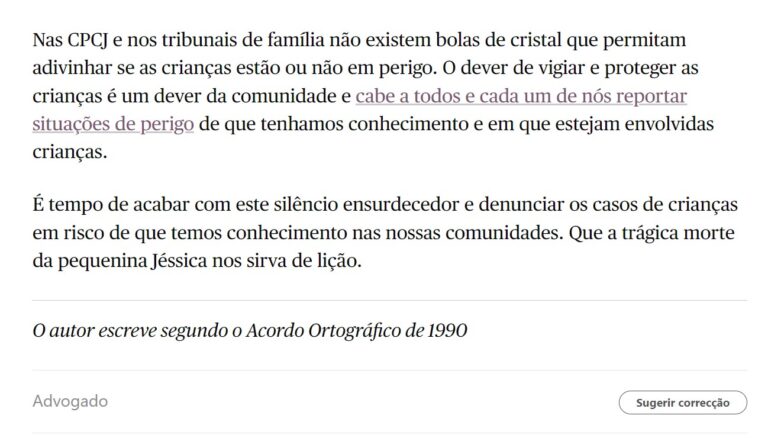