Opinion article by our coordinator at Público on 05/05/2022, about the aspects to be taken into account in agreements and decisions regarding parental responsibilities. Read the article on the Público website or the translation and in pdf below:

“Rules to be observed in agreements on parental responsibilities.

One would expect that a parent concerned about the welfare – and, for that matter, the mental health – of his or her children would be able to work out on their own those little details that, for one reason or another, have been left out of the agreement or the court judgment.

Fathers and mothers involved in very heated parental conflicts know few boundaries. In one case in which I intervene, a father, at the beginning of his vacation period with his daughters, insists on picking them up from their mother’s house at one minute past midnight. He says that after midnight it is already “his day” and there is no way he will leave them one minute longer in their mother’s company… It sounds like a joke, but it’s not.

A father who does this is clearly not concerned about his daughters’ well-being, despite his claims to be, using them as weapons in a war against the children’s mother. And in this all-out war, anything goes, including forcing the girls to go to his house in the middle of the night, threatening mother and daughters that he will call the police if the children are not delivered. Imagine the terror in which these children, who are about ten years old, live every time the day and hour of one of these “exchanges” approaches.

And all of this is because, in the current parental responsibilities agreement, no provision has been made for the time when the first day of the vacation with the father and mother begins.

One would expect that a father and mother concerned about the well-being – and, for that matter, the mental health – of their children would be able to work out on their own these small details that were left out of the agreement or the court ruling that defined the system for exercising parental responsibilities. The family courts, however, are full of cases in which nonsense like this is discussed.

In order to avoid that, under the pretext of these omissions, one of the parents may bring court rulings, be as exhaustive as possible. And this is especially true in cases where the level of litigation between the parental couple is very high.

Thus schemes should provide for the places and times at which children’s ‘transitions’ take place: when they cease to be in the care of one parent and are handed over to the other. Where possible, these changes should take place at school, to avoid unnecessary interaction: one parent leaves the child at school in the morning, and the other picks them up in the afternoon. In these cases of more exacerbated conflicts, “switches” at home by one or the other parent should be avoided, as they often lend themselves to fights and altercations often witnessed by the children.

It is advisable to indicate the criteria for fixing the days on which the children will spend vacations with each parent during the periods of Christmas and New Year, Carnival, Easter and summer. In cases where parents are unable to reach any consensus, it may even be appropriate for the vacation periods always to be the same (for example, the summer vacation period with the father will always be from August 1 to 15.

The same goes for holidays. The regime should specify an objective criterion to determine with which parent the child will spend Christmas Eve and Christmas Day, New Year’s Eve and New Year’s Day, Carnival Day, Good Friday and Easter Sunday, the child’s birthday, birthdays of family members and other caregivers, Father’s Day and Mother’s Day each year. And on all other holidays. Nothing prevents, of course, more or other holidays from being fixed, which happens especially with families that do not profess the Catholic faith. The times and places where the “exchanges” take place should be indicated, as well as the responsibility for transporting the children.

Extracurricular activities are another common source of disagreement. The regime should establish the criteria for enrolling the child or youngster in sports or recreational activities, defining whether or not the agreement of both parents is required. It should also stipulate who will be responsible for paying the costs of the extracurricular activity and transporting the child to the respective location.

A scheme that involves consensus building presupposes functional and cooperative parents committed to the well-being of their children. In cases where the parents’ focus is on the conflict and not the children, then it is prudent not to leave open aspects that are traditionally a source of conflict and try to regulate them comprehensively. It is the well-being and mental health of the children that demands it.” 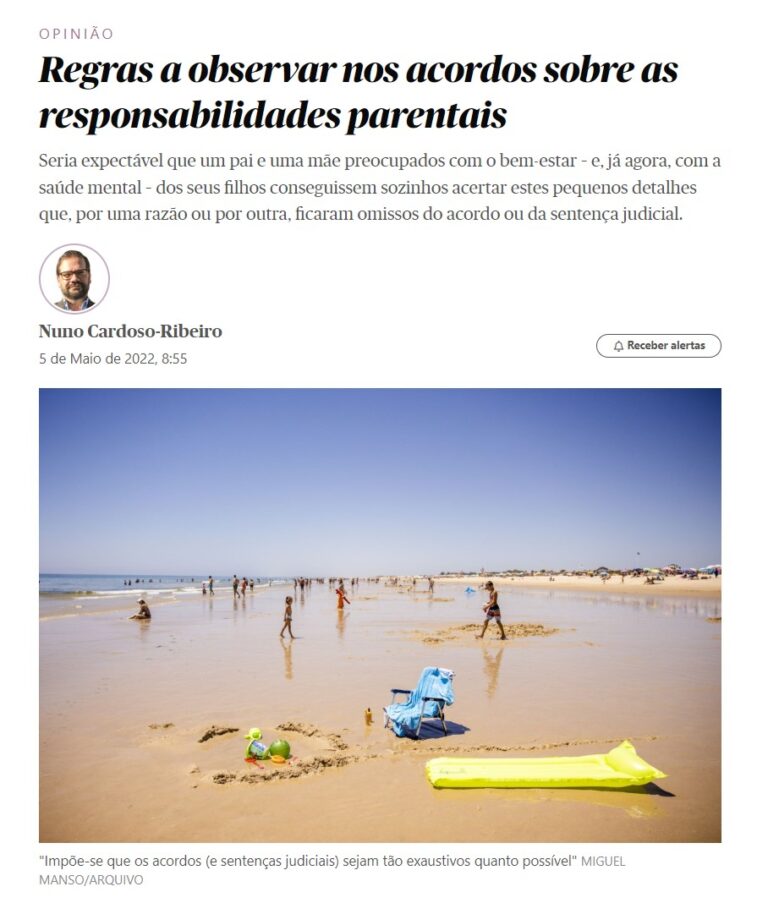 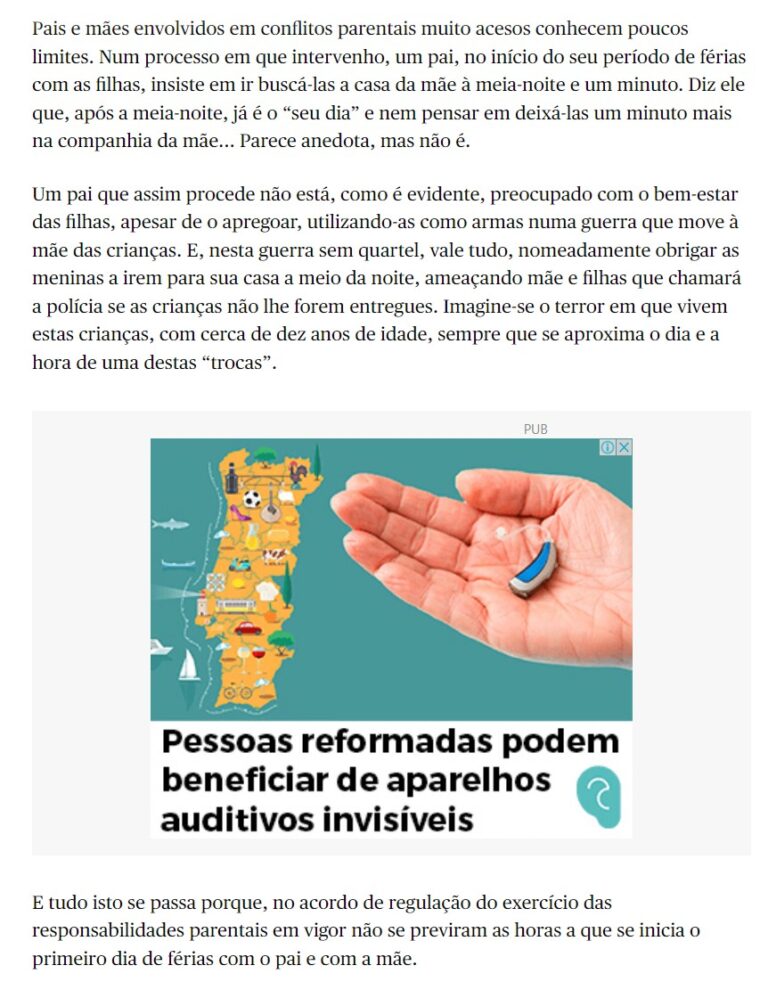 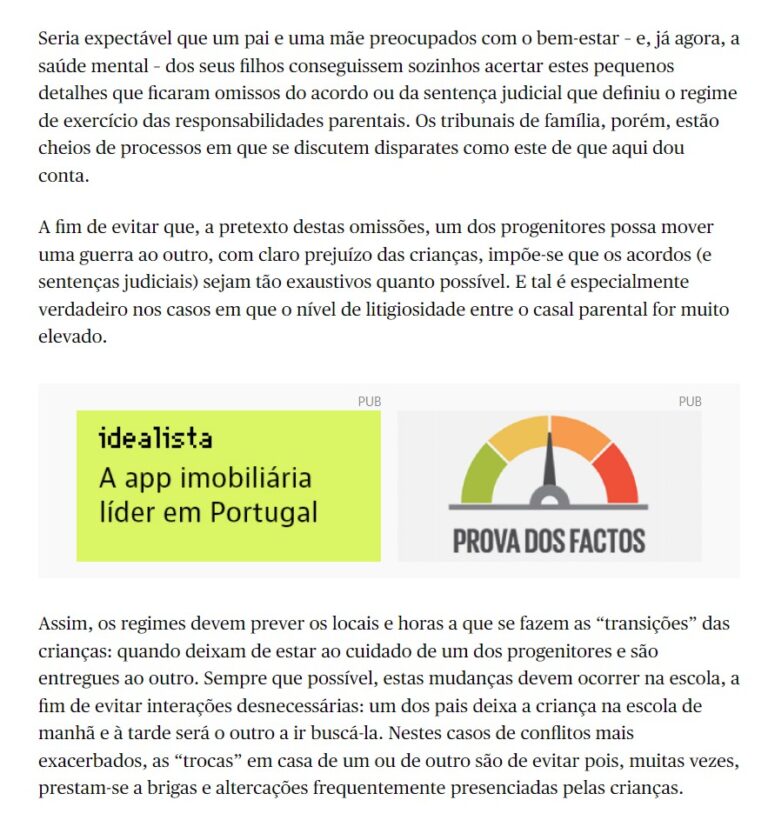 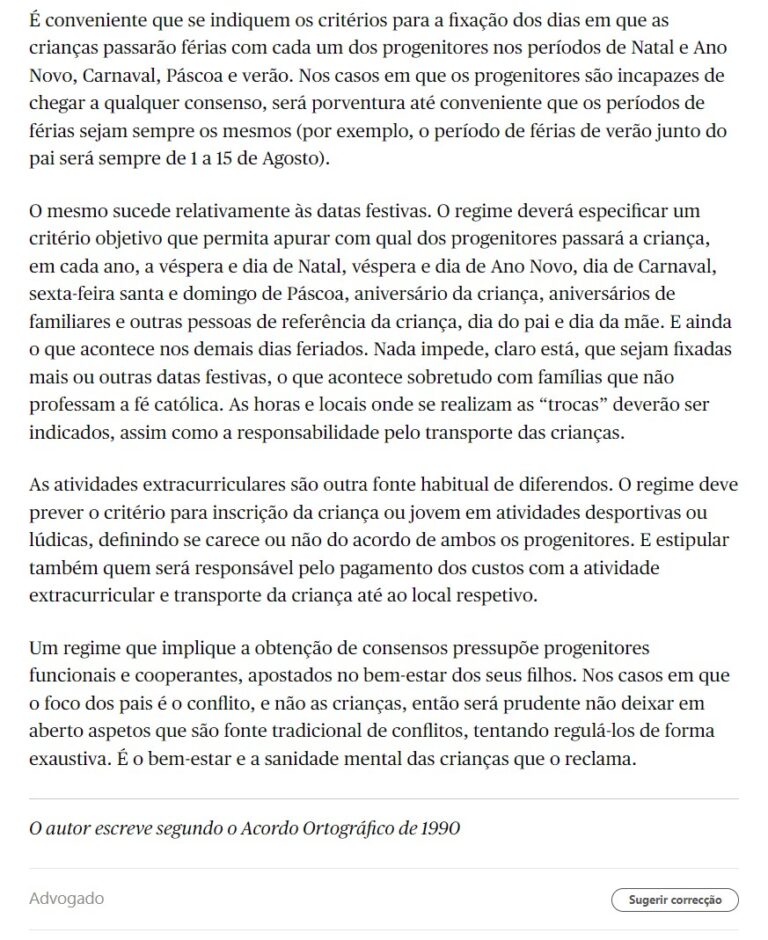