Opinion article by our coordinator, Nuno Cardoso-Ribeiro in the Público newspaper on May 11th, 2020 about the case of little Valentina and the alternate residence. Read the article on the Público website or the translation and the article in pdf below:

“The case of little Valentina and the alternate residence

Infanticide is definitely not a gender issue. In the same way, alternate residence cannot be demonized because a father – or a mother – has committed an unspeakably criminal act.

It was with shock and dismay that the whole country received the news of little Valentina’s death at the hands of her own father.

In due time we will know the truth The truth will be known in due time, and specifically, whether the child was murdered by her father and under what circumstances. Until then, this man and his wife are presumed innocent.

Filicides are a dramatic reality, especially when the victims are children, and the outrage has spread – and rightly so – through the social networks, but soon there was accusatory data against judges who set alternate residence regimes in the case of separated/divorced parents, or cohabiting against the children’s will.

Now, as a family and children’s lawyer, I cannot let this infamy go unnoticed. To do so would be to admit that any father – male, that is – is a potential murderer of his children!

The reality, however, is quite different, as the sadly famous cases of Sóna Lima – who drowned her two daughters in Paço D’Arcos, Caxias – and Joana’s mother in the Algarve have shown.

Infanticide is definitely not a gender issue.

In the same way, alternate residence cannot be demonized because a father – or a mother – considers it an unqualified criminal act.

Unlike many legal practitioners in the family field, I am not an uncompromising defender of the alternating residence regime. It may be a solution for many families, but not for many others. In some cases, the children should live mostly with the mother, in other cases it is better to give them to the father. Only on a case-by-case basis will it be possible to determine which regime, in concrete terms, is best suited to that particular family.

Since it is impossible for us to keep an eye on all families, especially those without a relevant history of dysfunctionality, we can be sure that this girl’s case will not, unfortunately, be the last.

Regardless of my personal position on the alternating residence one thing is certain: the sad case of Valentina cannot be used as an argument to the detractors of this regime, because a potential murderer of your child should not have the child in his care, be it in any other regime…

In family courts we don’t have crystal balls and decisions are made, more or less correctly, with the data that is available and with the best interests of the child in mind. And this involves, in the overwhelming majority of situations, maintaining contact with both parents after divorce or separation.

The reality is that the family, unfortunately, is not always the “safe harbor” that should shelter children from bad weather. As much as it pains us to admit it, we know that it is within the family that the greatest atrocities against children are committed… mistreatment, neglect, and sexual abuse. The abusers of children are, as a rule, family members or people close to the family, as the home of little Valentina seems to show once again.

In the impossibility of keeping an eye on all families, especially those with no history of dysfunctionality, we can be sure that this girl’s case will not, unfortunately, be the last.” 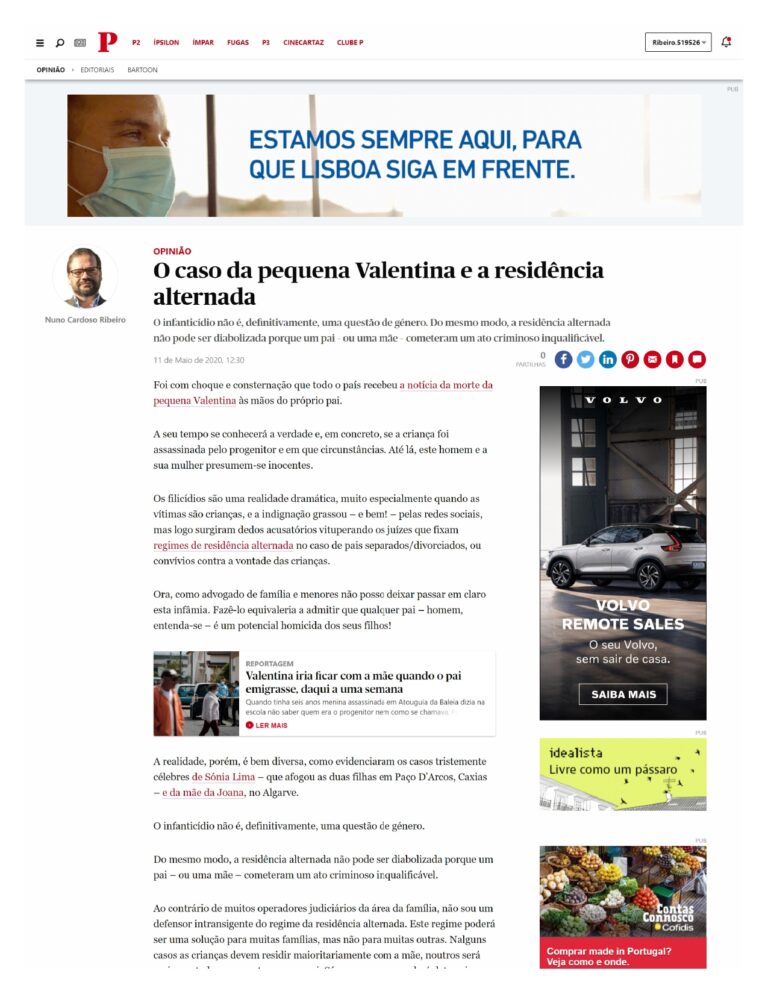