Opinion article by our coordinator in the Público newspaper of 15/06/2022. About family lawyers and the difficulties they encounter in family and juvenile courts. Read the article on Público’s website or the pdf translation below:

I have had mothers and fathers come to my office who, having attended parenting conferences in court without a lawyer present, left with a “settlement” that they thought was a court-imposed decision.

In many family and juvenile court cases, lawyers are not necessary. In these very delicate legal disputes, where the future of our children is decided, the parents are allowed to appear alone in court, and therefore unaccompanied by a representative who is qualified to conduct the proceedings.

The consequences of the parties in conflict representing themselves are often disastrous. In fact, there are few people who, in matters as sensitive as those that are discussed in family courts, manage to maintain the objectivity that is required when it comes to deciding the future of their children, for example. In a previous article published in this newspaper, we have already spoken out against this possibility admitted by our law.

And the truth is that I have had mothers and fathers come to my office who, having participated in parents’ conferences in court without a lawyer being present, left with an “agreement” that they thought was a decision imposed by the court…

The fact that these processes do not require the presence of lawyers, however, has other negative consequences for citizens. As a rule, court proceedings (conferences, trials, etc.) are scheduled with the lawyers’ agendas in mind. In the case of most family cases, however, since attorneys are not required, some courts do not take the schedules of these representatives of the parties into consideration – after all, if it is not necessary to have an attorney in the case, a trial or conference should not be postponed just because the attorney cannot be present.

Thus, a parent who, aware of the seriousness of the matter, hires the services of a lawyer to represent him or her in a parental responsibility proceeding, runs the risk of not having him or her by his or her side at the parenting conference, for example, or at an evidentiary proceeding, because the court has decided to schedule it without taking the lawyer’s schedule into consideration.

These, then, are the collateral damages of the unnecessary presence of lawyers in many family and juvenile court proceedings, and they also affect those who rightly choose to have a lawyer at their side.

It should be noted, in fairness, that most of the courts in the greater Lisbon area, which I know best, are sensitive to this issue and try to reconcile the dates with the lawyers’ schedules. But there are some notable exceptions. These are courts that sideline the role of lawyers – supported by law, let us emphasize – for reasons that are not evident. Some will say that, without lawyers, they would eventually stop, because they believe it is not in the best interests of their clients or their children. I do not, however, want to believe that this is the case, and prefer to think that these are courts that profess a more literal and formal interpretation of the law, without paying attention to the right – constitutional – that everyone has to be represented by a lawyer.

It is clear that the courts, in both cases, are simply applying the law as they interpret it, and therefore the legislator should be held responsible for having foreseen that lawyers are dispensable in these cases. This improves justice statistics, but leaves people’s problems unsolved.

Note that the right to be assisted by a lawyer is expressly provided for in our Constitution, as part of the broader right, also constitutionally consecrated, of access to the law and to effective judicial protection (see article 20). Sometimes it doesn’t seem so.” 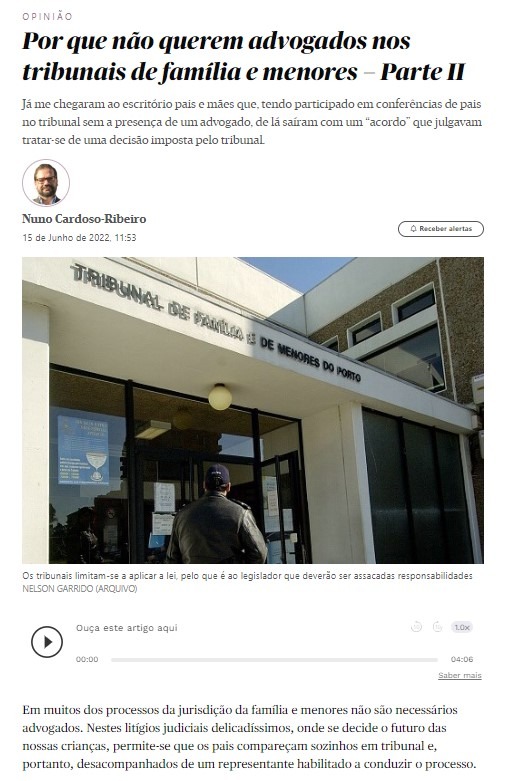 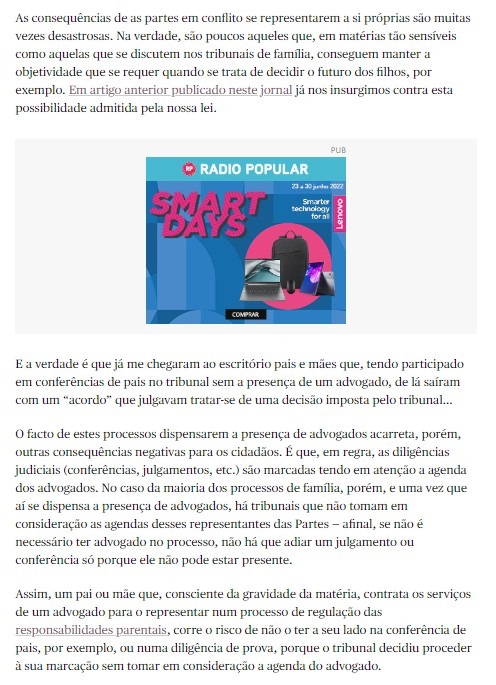 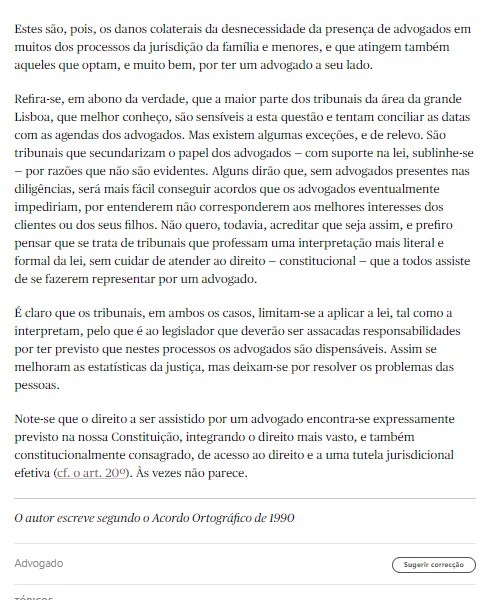