Not paying child maintenance is a crime...for the sake of appearances! – opinion article by Nuno Cardoso-Ribeiro at Público

Opinion article by our coordinator, Nuno Cardoso-Ribeiro, in the Público newspaper on 04/26/2021 regarding the non-payment of child maintenance. Read the article on Público’s website or the translation and pdf below:

“Not paying child maintenance is a crime…for the sake of appearances!

Children are, of course, the main victims. And, unfortunately, children have no voice. How do you explain the leniency of the national judicial system regarding this crime?

Convictions for the crime of violating the obligation (to pay child support) for child support are practically non-existent. In 2019, Jornal de Notícias reported that no one has been incarcerated in Portuguese prisons for this crime since 2016. In the RASI (Annual Internal Security Report) of recent years, there is also not a single reference to this crime.

Knowing that non-payment of child maintenance is a plague that we family lawyers often face, our reality contrasts with that of other countries, such as Brazil or Spain, where there seem to be effective consequences for reluctant debtors.

How to explain the leniency of the national judicial system regarding this crime?

Children are, naturally, the main victims of this crime. And, unfortunately, children do not have a voice.

The secondary victims will be mostly women, mothers who, after divorce or separation, are now single-handedly or mostly responsible for the care of their children. And who, due to the non-payment of alimony, assume the burden of childcare alone.

However, the criminal procedure depends on a complaint and there seems to be a general lack of knowledge among the population regarding this crime. Ignorance is heightened by the absence of convictions that resonate with public opinion. Unaware that the non-payment of alimony is a crime, the overwhelming majority of victims do not file a complaint, which makes criminal prosecution impossible. At the same time, there seems to be a well-founded belief in the irrelevance or uncertainty of a conviction, which leads many victims to do nothing.

The high poverty levels of the population also seem to be a relevant factor in this equation. Someone living on a minimum wage will struggle to make punctual maintenance payments of 100 or 150 euros per month. Does it make sense for him to incur the costs of criminal prosecution? Or is it better to allow him to channel scarce resources into paying alimony?

But this will not always be the case. Sometimes non-payment of alimony is not due to economic hardship, but is yet another weapon in the parental war that many couples engage in after divorce or separation. Because, as we know, domestic violence often takes the form of economic violence, as recognized by the Istanbul Convention (Prevention and Combating of Violence against Women and Domestic Violence). And children and women are the main victims of this violence.

Whatever the reasons, the truth is that the non-payment of alimony constitutes economic violence, condemning the debtor to an economic penalty against children and women?” 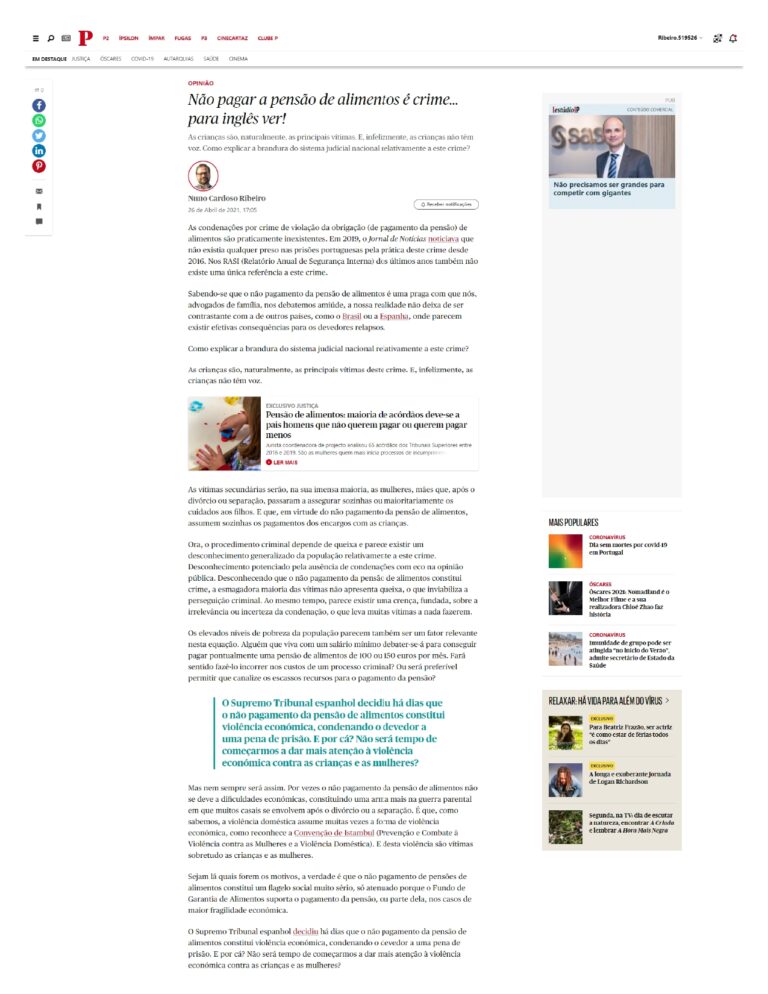