Compensation after divorce – opinion article by Nuno Cardoso-Ribeiro at Público

Opinion article by our coordinator at Público on 12/15/2020 regarding compensation after divorce. Read the article on Público’s website or the translation and pdf below:

Whenever there has been an excessive sacrifice of one of the spouses for the sake of common life, and which has caused him/her harm, he/she may, after divorce, demand due compensation from the other spouse.

We all know of cases of people who have given up their professional life in order to dedicate themselves exclusively to their home and children. Or they have settled for a less demanding career in order to have more time to devote to the family: they have turned down positions of greater responsibility that required greater availability and dedication; they have not taken courses and training courses that would have taken up their time but would have opened the door to new professional challenges; they have accepted low-paid jobs just because they could stay close to home, etc.

And these people are overwhelmingly women, both in Portugal and in most European countries.

As a rule, this division of tasks within the family has corresponded to an opportunity for the spouse who, freed from the constraints of domestic life, has been able to build a successful professional career that he or she would not have been able to achieve if the duties of family life had been imposed upon him or her. He could work on and off the clock, he could study and accumulate degrees and training that allowed him to move up in his career, he didn’t turn down any opportunity to occupy more challenging and demanding positions and, therefore, better paid.

These arrangements are common in the context of married life, and are often conscious choices by one or the other spouse, the essential support for school and extracurricular activities, and, on the other hand, obtaining the income necessary for family life, mostly through the work of the spouse on whom the obligations of family life are not imposed.

This balance, which often operates during marriage, may be threatened in the event of divorce. Indeed, the spouse who has put his or her career path second for years is now constrained by this choice and, consequently, his or her ability to earn an income is limited by it. On the contrary, the spouse who has been able to devote himself or herself fully to his or her career will continue to reap the benefits of this division of labor between the couple.

Now, in these cases, will the spouse whose professional career has been cut short and conditioned be able, in the event of divorce, to obtain pecuniary compensation from the other spouse that will somehow make it possible to restore some balance between their situations?

Among the various marital duties imposed on the spouses is the duty of mutual assistance. As a result of this duty, each spouse must contribute to the costs of family life. This contribution may be pecuniary or material, namely in the form of work carried out in the home or in raising the children, and does not have to be equal: each spouse should contribute according to his or her abilities and aptitudes.

Accordingly, the law provides that the spouse who has contributed disproportionately to the burden of domestic life, because he/she has excessively renounced his/her own interests, and provided that such contribution has caused him/her a serious patrimonial loss, whenever there has been an excessive sacrifice on the part of one of the spouses for the sake of the common life, and which has caused him/her loss, he/she may, after the divorce, demand the due compensation from the other spouse.

Unfortunately, however, the law does not allow the injured spouse to obtain this compensation as early as during the divorce proceedings, as would be natural. He or she will have to assert this claim in the subsequent inventory process for the distribution of the couple’s common property or in a separate lawsuit filed for this purpose. This limitation, along with other difficulties in the legal text, in our opinion, is in need of urgent revision and causes that, most of the time, this compensation ends up not being claimed and is, therefore, left unpaid. In fact, after a perhaps painful divorce process, not all former spouses will be emotionally and mentally ready to embark on a new “judicial war” of uncertain duration and outcome.” 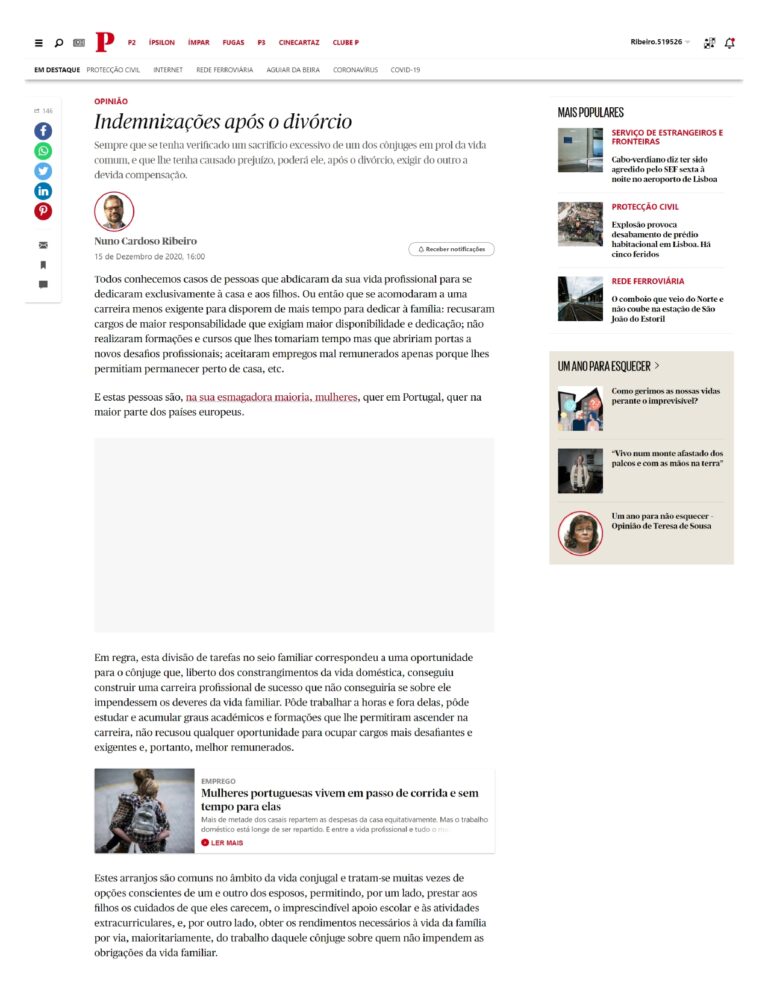 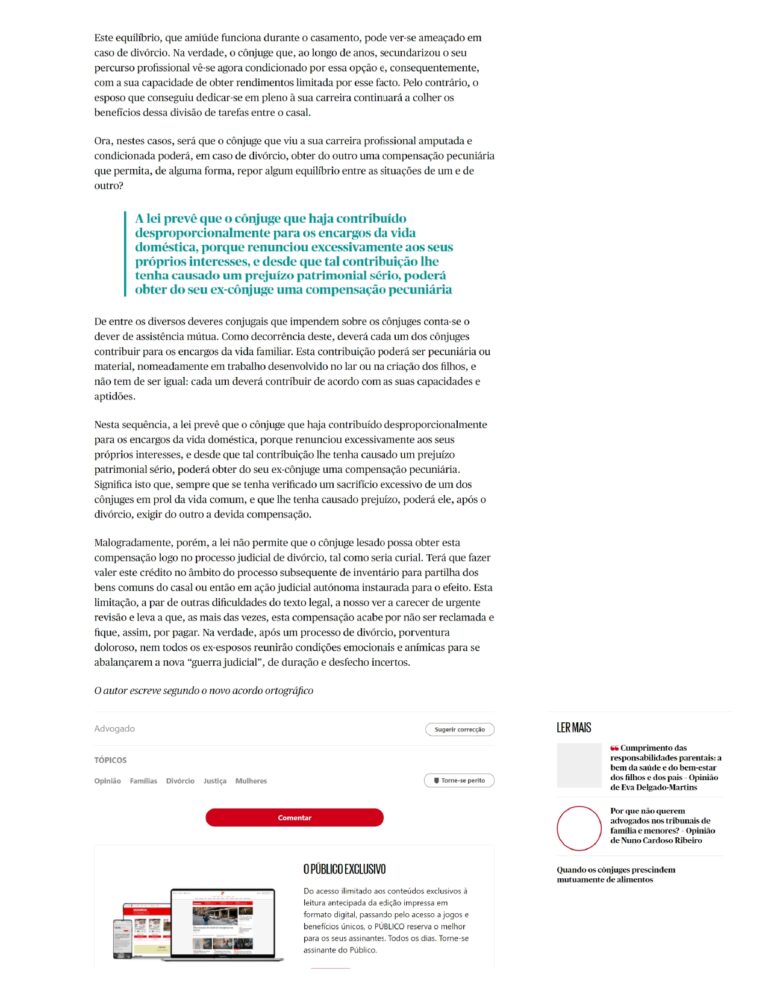