Is the mother entitled to child maintenance during pregnancy? – opinion article by Nuno Cardoso-Ribeiro in Público

Opinion article by our coordinator in Público on 09/09/2022, regarding the payment of child maintenance to the mother during pregnancy. Read the article on Público’s website or the translation and pdf below:

“Is the mother entitled to child maintenance during pregnancy?

Even in cases where the father refuses to contribute to the payment of expenses arising from pregnancy, he may be forced to do so later on by effect of a court order. And in these cases, he will pay child support retroactively from the beginning of the pregnancy.

Single parent households make up a significant part of Portuguese families. According to Pordata, in 2021 there were about half a million families where only one parent lived with the child(ren). Most of these households are the result of divorces or the break-up of civil unions after the child is born. But in some cases, the rupture occurs while the mother is still pregnant. In other cases, there was never cohabitation between parents.

Pregnancy and the birth of a child entail, as is well known, a number of very significant expenses, from doctor’s appointments and examinations to special diet or other care that the mother-to-be may be required to observe by a doctor’s recommendation. It can also be necessary to purchase clothing and all the paraphernalia of accessories that a newborn baby demands.

In a family context, the payment of these expenses by both members of the couple will not be a problem. This may not be the case, however, in situations where the pregnancy was unwanted by both partners, or where the father has given up his desire to have a child, or in cases where he has doubts about the paternity of the child.

And in these cases, who has to pay the expenses that are pregnancy related?

In cases where father and mother are not married, the presumed father may refuse to bear his share of the costs, for any of the reasons mentioned above, or for other reasons. Even in these cases, alimony may be dueto the mother during her pregnancy.

The Civil Code (art. 1884) provides that a pregnant woman has the right to receive child support from the father of her child from the time of pregnancy. However, this right presupposes prior establishment of paternity. If there is no marriage, paternity is established by voluntary declarations made at the Civil Registry Office or, in the absence of voluntary declaration by the father, in a paternity investigation lawsuit.

Thus, even in cases where the father refuses to contribute to the payment of pregnancy related expenses, he may be required to do so later by effect of a court order. And, in these cases, he will pay retroactively the alimony fixed by reference to the beginning of the pregnancy.

Pregnancy is a delicate period in the lives of families, and it is regrettable that in many cases mothers-to-be are faced with a refusal by the father of their child to assume expenses, thus disrupting a phase of life that should be marked by peace and tranquillity.” 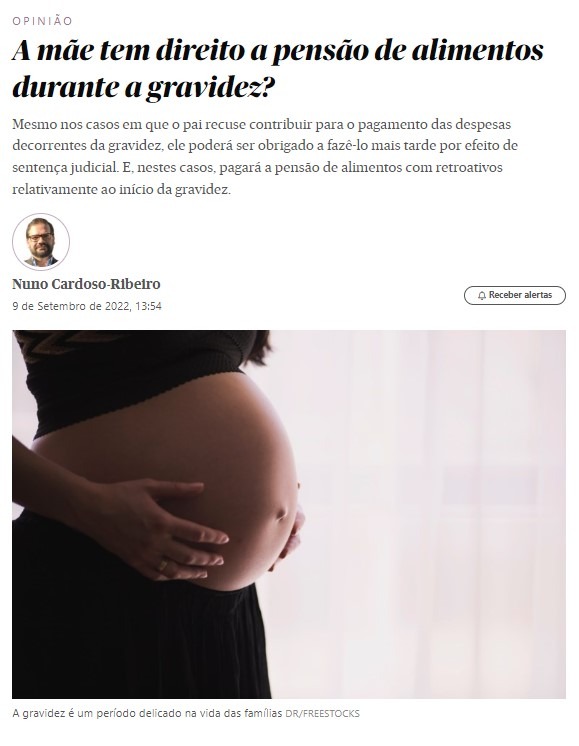 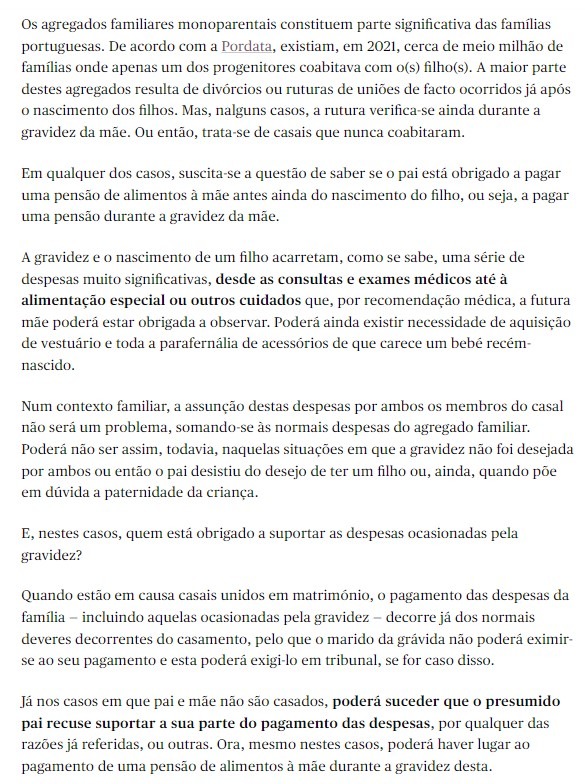 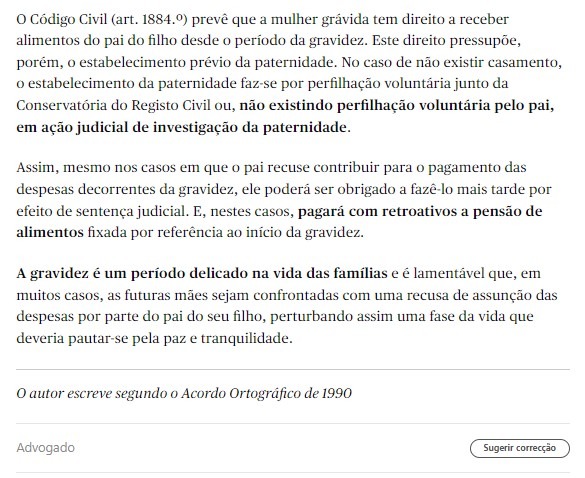