Lawyers and children – opinion article by Nuno Cardoso-Ribeiro in Público

Opinion article by our coordinator in the Público newspaper of 17/07/2020 regarding lawyers and children. Read the article on Público’s website or the translation and pdf below:

The model of advocacy that is advocated for the family and juvenile jurisdiction is a different one. Both parties will have to work for the same purpose, the defence of the interests of a single party, the child.

“To us, family lawyers, is also incumbent the obligation, which is that of the entire community, to form the men and women of tomorrow”

Every family lawyer has experienced the dilemma: what to do when our client’s conduct is harmful to his or her children? What to do when he exposes the children to parental conflict, for example by denigrating the other parent? Or making them witness arguments? Or making them aware of the vicissitudes of the judicial process? Or forcing them to take sides with the parent?

The most comfortable reaction would be to ignore these conducts of clients, sponsoring them tooth and nail in court, as if it were nothing. After all, it is they, and not their children, who pay our fees. And if the parent himself or herself is not concerned about the harm done to the children, should we, the lawyers, be the ones to worry?

The answer to this question, of course, can only be one: of course we should!

Lawyers who intervene in cases within the family and juvenile jurisdiction are, in the first place, obliged to defend the best interests of the children. Doing so is a civic, deontological and legal duty.

Civic, because the protection of children should be considered as part of the duties of lawyers to the community, pursuant to their professional statute.

Legal, because it derives from several national and international laws that govern us (such as the General Regime of the Civil Guardianship Process, the Law for the Protection of Children and Youth in Danger, the Convention on the Rights of the Child, among others).

What to do, then, when the family lawyer realizes that his client’s conduct is harmful to the children, namely because it exposes them to parental conflict?

In the first instance, we would argue that the lawyer should clarify to his client that the protection of children is one of his primary duties. At the same time, he should do an educational work and make him aware of the imperative need to protect and preserve his children. And, very often, this initial intervention has an effect. The lawyer is, as a rule, heard by those who seek him out. If the client persists, and his behaviour does not change despite his appeals, the lawyer will have no alternative but to withdraw from the practice, making it clear to the client why he is doing so.

This model of conduct that is recommended for family lawyers clashes with the traditional conception of bar advocacy, based on the “trench warfare” dialectic that characterizes the traditional procedural model. In this model, two parties, in opposing camps, fight over arguments with the aim of asserting their interests to the detriment of the other party.

The model of advocacy that is advocated for the family and juvenile jurisdiction is different. Here both parties will have to work for the same purpose, the defense of the interests of a single party, the child. Parents may have different ideas about how this interest is best served, but the ultimate purpose of both parties, and of their respective lawyers, must be one: the defense of the child and his or her best interests.

We family lawyers also have the obligation, which belongs to the whole community, to educate the men and women of tomorrow. And this is also done by protecting and preserving children at such a delicate moment as divorce or parental separation.” 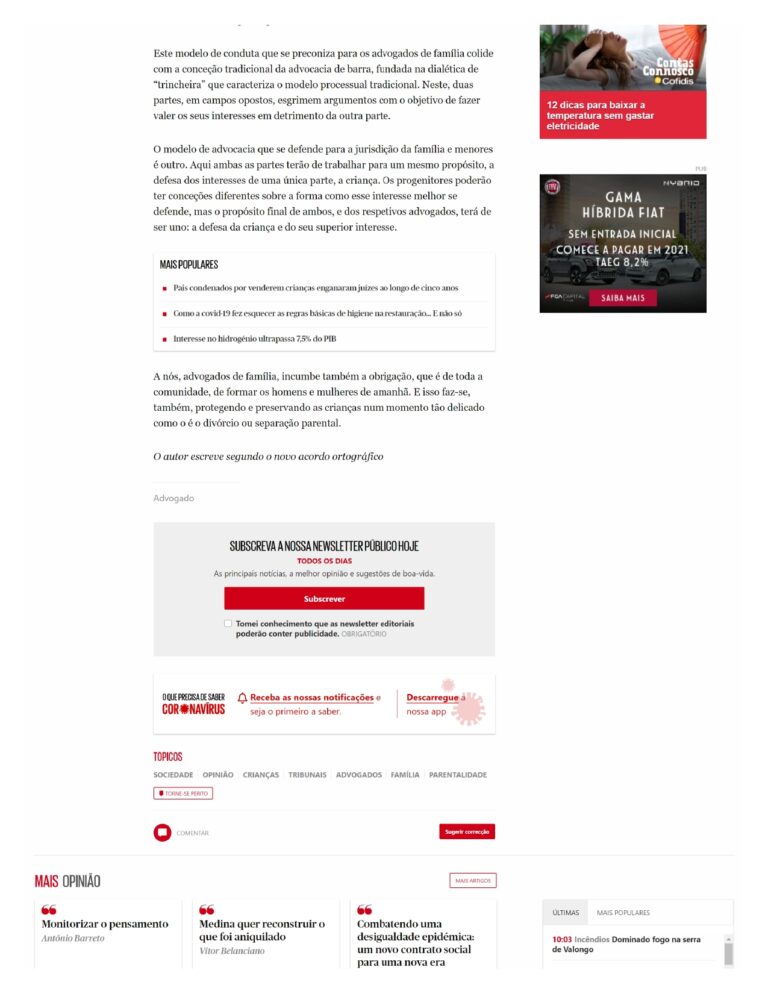