Opinion article by our coordinator, Nuno Cardoso-Ribeiro in the Público newspaper on April 21st, 2020 about the criminal paralysis of the justice system. Read the article on the Público website or the translation and the article in pdf below:

“The criminal paralysis of the justice system

The country risks that this ad hoc judicial vacation will be joined to the summer judicial vacation, which will leave Portugal without a justice system until September. The delays will be enormous and will take months or years to recover.

In the first days of the legislative avalanche unleashed following the arrival of covid-19 in Portugal, the government forgot about the courts and the justice sector. Decree-Law 10-A/2020, of March 13, was silent about judicial deadlines, which prompted protests from judicial operators, such as lawyers, who were unable to respect procedural deadlines in their cases.

It has been alleged – and rightly so – that it is not possible to meet with clients, visit prisoners, obtain documents. I would add one particular reason: my daughters, ages 3 and 8, confined at home, hardly provide the tranquillity that much of my work requires.

On March 19, with the country completely paralyzed, Law 1-A/2020 finally regulated the issue of judicial deadlines in progress, determining a total and absolute suspension, including urgent cases, and only contemplating a very limited range of exceptions.

Moreover, the legal text is ambiguous and has raised interpretive difficulties. If legislation is so poor in peacetime, what can we expect in wartime?

The suspension of time limits decreed implies that steps normally taken in court with the physical presence of the parties, such as trials, parent-teacher conferences, and conciliation attempts, will not take place. This is an understandable measure, considering the social isolation to which we are subjected.

It turns out, however, that the course of a judicial process is much more than the judgment or sentence that ends it. There is a previous work done by lawyers, judges and other parties, which precedes the final decision and often continues after it. This work, invisible to the citizen, represents the lion’s share of the tasks of judicial operators, namely judges, lawyers, experts and employees.

Law 1-A/2020 has paralyzed the entire system, as the parties and their lawyers are no longer obliged to comply with the deadlines that the law stipulates for the practice of each act.

This suspension of deadlines is incomprehensible, unreasonable and unjustified. And it is already causing very serious delays in the course of the processes underway in the courts and those that may be brought in the future.

It is incomprehensible that the parties, through their lawyers, have been exempted from carrying out all those acts that are indispensable to the conduct of the proceedings – such as sending petitions, defence, oppositions, requests and documents – when the overwhelming majority of court proceedings are dematerialized and the sending of documentation is not done electronically.

There are few cases in which one must resort to the postal route, and the CTT – unlike the courts – is in full operation.

It is true that lawyers are now subject to constraints that make their work difficult or even impossible. But for cases where it is impossible to meet deadlines, which are a small minority, there is the figure of “fair impediment” which allows the act to be taken at a later time. Meetings can be replaced by telephone or video calls, and the documentation can be sent to the process at a later date.

The pandemic should have determined the extension of legal time limits – doubling them, for example – and the expansion of the figure of “fair impediment”, but never a total paralysis of the process.

We risk that these ad hoc judicial vacations will join the summer judicial vacations, leaving the country without a justice system until September. The delays will be enormous and will take months or years to recover. We need to get the system working again, now!” 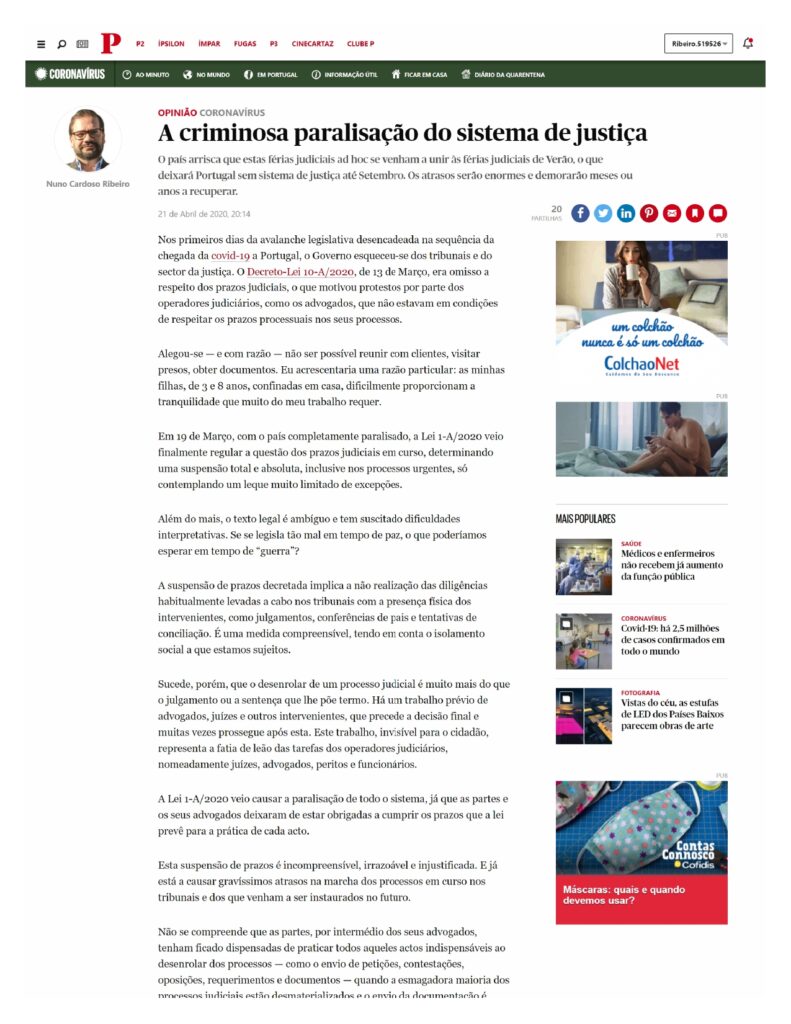 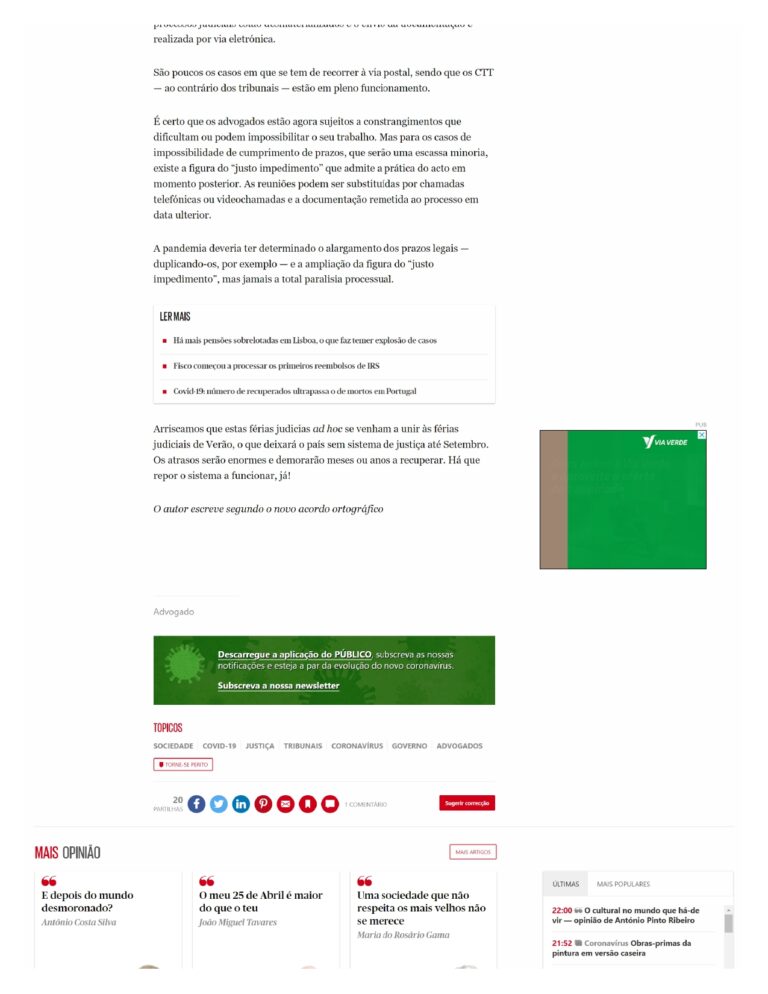