Opinion article by our coordinator, Nuno Cardoso-Ribeiro in the Público newspaper on April 27, 20 regarding “officialy-appoined lawyers and the others”. Read the article on the Público website or the translation and the article in pdf below:

“The officially-appointd lawyers and the others

Last week I wrote an article in this newspaper where I warned about the dramatic situation in the justice sector caused by the general paralysis of the system.

This paralysis has consequences for most citizens, but also for the lawyers themselves. They are multiplying in petitions, initiatives, and Facebook groups where they complain of economic difficulties and demand support from the State and the Lawyers and Solicitors Provident Fund (CPAS).

It should be clarified that lawyers make their provident fund contributions to the CPAS, and not to the Social Security, and it will be the Fund that – we hope! –  will one day pay our retirement. The discounts made do not depend on the earned income, but on the choice of each one who, according to certain rules, will choose the amount of his or her monthly contribution which, in turn, will later determine the value of the retirement.

A significant part of those enrolled in the program pays into the 5th category, which, as of this date, has a monthly value of €251.38.

The protection offered by CPAS to its members is very scarce, being practically limited to retirement due to old age or disability. There are no sick leave or unemployment benefits.

The lack of support has motivated successive protests, and many lawyers are threatening to suspend the payment of their CPAS contributions, claiming integration in the general social security regime.

How to explain, however, this sudden decrease in income that so many lawyers complain about if, as we all know, court cases often take several years, and fees are typically collected throughout the process and sometimes only at the end?

An ordinary lawyer continues to have the same clients and cases today as he had on March 18, if not more, and will collect the fees due to him on the terms agreed upon with the client. Likewise, he or she will continue to bill his or her client companies for the monthly fees they have contracted for him or her. By this I mean that a “traditional” lawyer will not, in principle, have yet suffered significantly from the consequences of the paralysis of the economy.

The problem, as you may have guessed, is that this sudden drop in income is felt especially by the so-called ” officially-appointed” lawyers, in other words, those who ensure the defence and sponsorship of people without resources and who are paid by the state.

According to known figures, of the approximately 30,000 lawyers registered at the Bar Association, 14,000 participate in the legal aid system. Many of them practice their profession in the traditional manner and the defence of their clients is merely a supplement to their income. Others, however, make a living out of it.

This dichotomy between ” officially-appointd” and the others has caused divisions in the class, since the interests of the two groups do not coincide.

Those who do not participate in the public defender’s office complain, quietly, that the causes of the public defender’s office monopolize the action and public intervention of the Bar Association, namely the demand for an increase in the amounts paid by the State, abandoning other issues that are important to the entire class. They also allege that the management of the legal aid system consumes vast resources for the Bar Association, funded by all, and that the training activities it promotes do not consider the specialization of the legal profession and are especially directed at them.

Those who participate in the legal aid system, on the other hand, complain about the lack of solidarity from their colleagues in the fights they have been waging for increases in their legal fees and, now, in the war they are waging against CPAS.

Regardless of the reasons for both camps”, today in the legal profession there is a polarization that fractures the class, weakens us and harms us all.

It is up to the Bar Association, and especially the current President, to reconcile the interests and legitimate aspirations of all, officious and unofficial. Let’s hope it succeeds!” 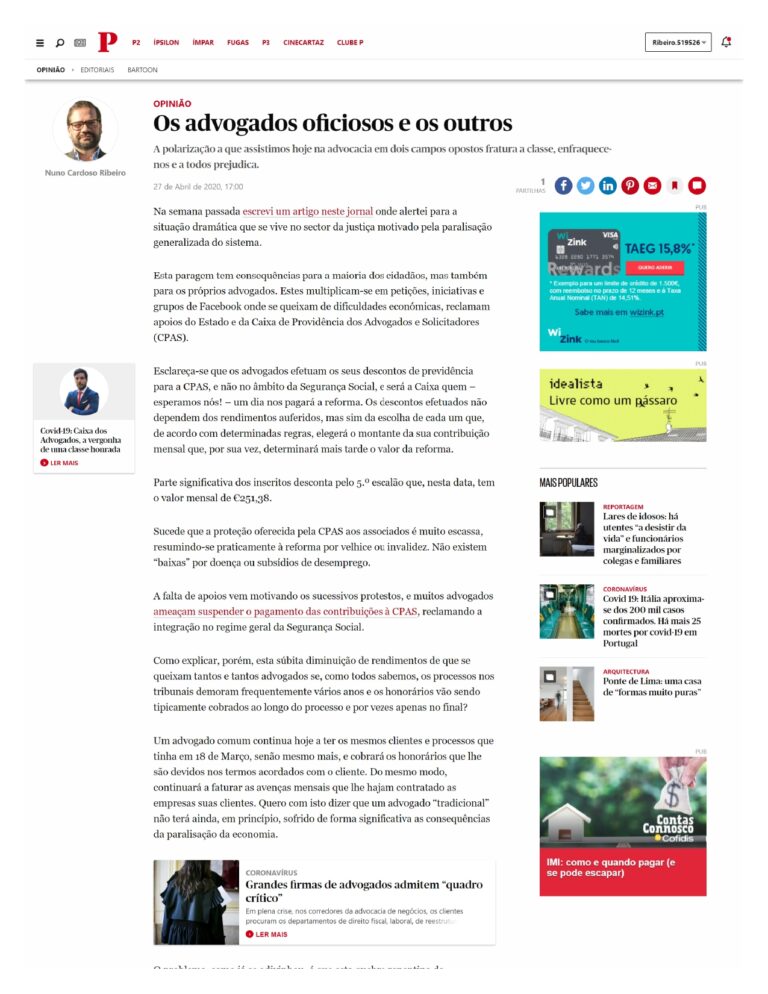 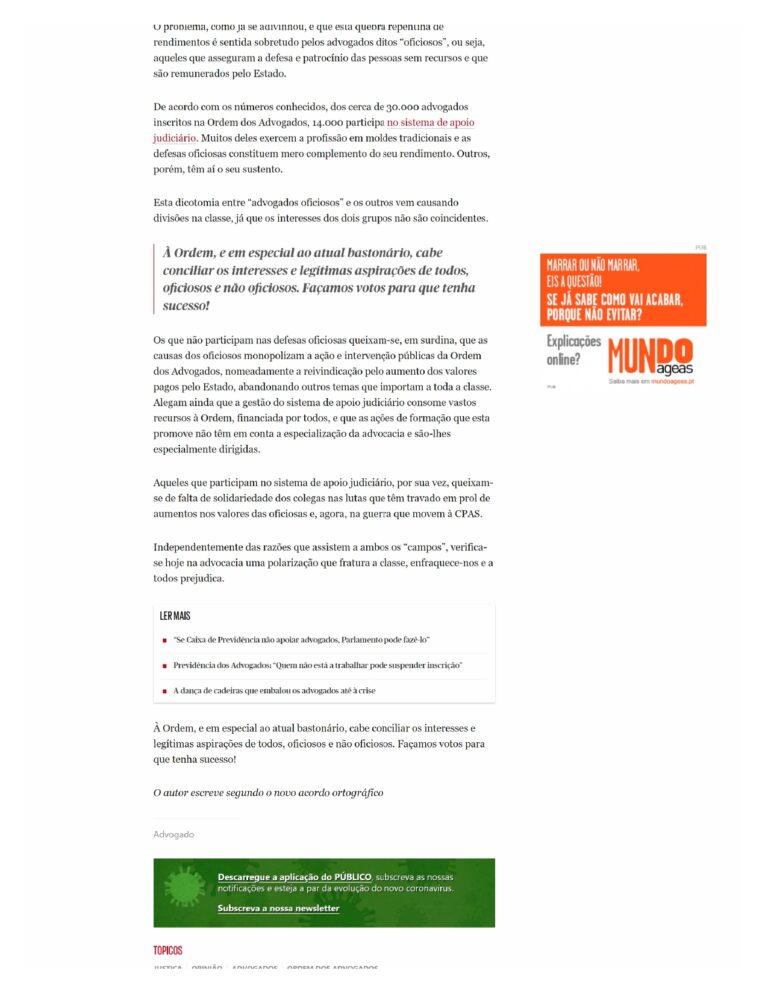