Opinion article by our coordinator in the Público newspaper of 09/12/2022, on how to safeguard the children’s inheritance in case of remarriage. Read the article on Público’s website or the translation or in pdf below:

“Portugal is one of the OECD countries with the highest divorce rate. According to Pordata, in 2020 the ratio of divorces per 100 marriages reached 91.5, a very significant jump from the 61.4 recorded in 2019.

In any case, the truth is that divorce and second marriages are a reality for an increasing number of Portuguese families.

Now, in the case of a marriage when one already has children from a previous relationship, the question of safeguarding the assets which are intended to be inherited by the children and not by the new spouse often arises. Because with marriage, the spouses become heirs – and lawful heirs – of each other. Legitimate heirs are those who cannot be excluded from the inheritance, even if the deceased had left a will to that effect.

What to do, then, in these cases, where a couple wants to remarry, but ensure that upon their death their estate is inherited by their children, and not by their new husband or wife?

Aware that this issue was a serious impediment to second marriages, the legislator published Law no. 48/2018, of August 14, which now allows spouses to reciprocally waive their status as legitimate heirs of each other prior to the marriage. This can only happen, however, if the property system of the marriage is that of separation. Thus, in the event of the death of one of them, it will be the other heirs – namely the children – who will inherit the deceased’s assets, and no longer the surviving husband or wife.

Unfortunately, this possibility of renouncing the status of heirs cannot be used by those who are already married. Married people will have to get divorced, enter into a prenuptial agreement where they agree to the renunciation, and marry again.

It should be noted, however, that the waiver, by itself, may not be sufficient to ensure that the spouses will not become each other’s heirs. In fact, and as is usual among us, Law no. 48/2018 raises doubts of interpretation and it is not clear whether, even renouncing the condition of legitimate heirs, the spouses maintain or not their condition of (legitimate) heirs.

Without going into technical-legal details that would be out of place here, it will be sufficient to mention that, in our opinion, it will be prudent to accompany the renunciation of a will that distributes the inheritance to the beneficiary that is intended to be protected: the children, in our example.

It should also be noted that the surviving spouse may have certain rights over the deceased’s property, even if not an heir. Under certain circumstances, there may be the payment of maintenance from the estate; similarly, the surviving spouse may also have the right to use the family home. This right of use of the house will be temporary, except in the case of those aged 65 or over, in which case it is lifelong.

Knowing that the house is often the most valuable material asset of families, and the one that they intended to safeguard in case of death by leaving it to the children, to consecrate a right to its use in favor of the surviving spouse seems to threaten the purpose that was intended to be achieved with the renunciation of the quality of heir.

Marriages seem to be out of fashion, and this legislative change will not reverse this trend. In any case, all legislative initiatives that aim to adapt the legal regime of marriage to the current reality of families and their legitimate desires are to be welcomed. What entered through the door should not be allowed to go out the window, as seems to be the case with the rights granted to the surviving spouse over the family home, which may jeopardize the effectiveness of the renunciation.” 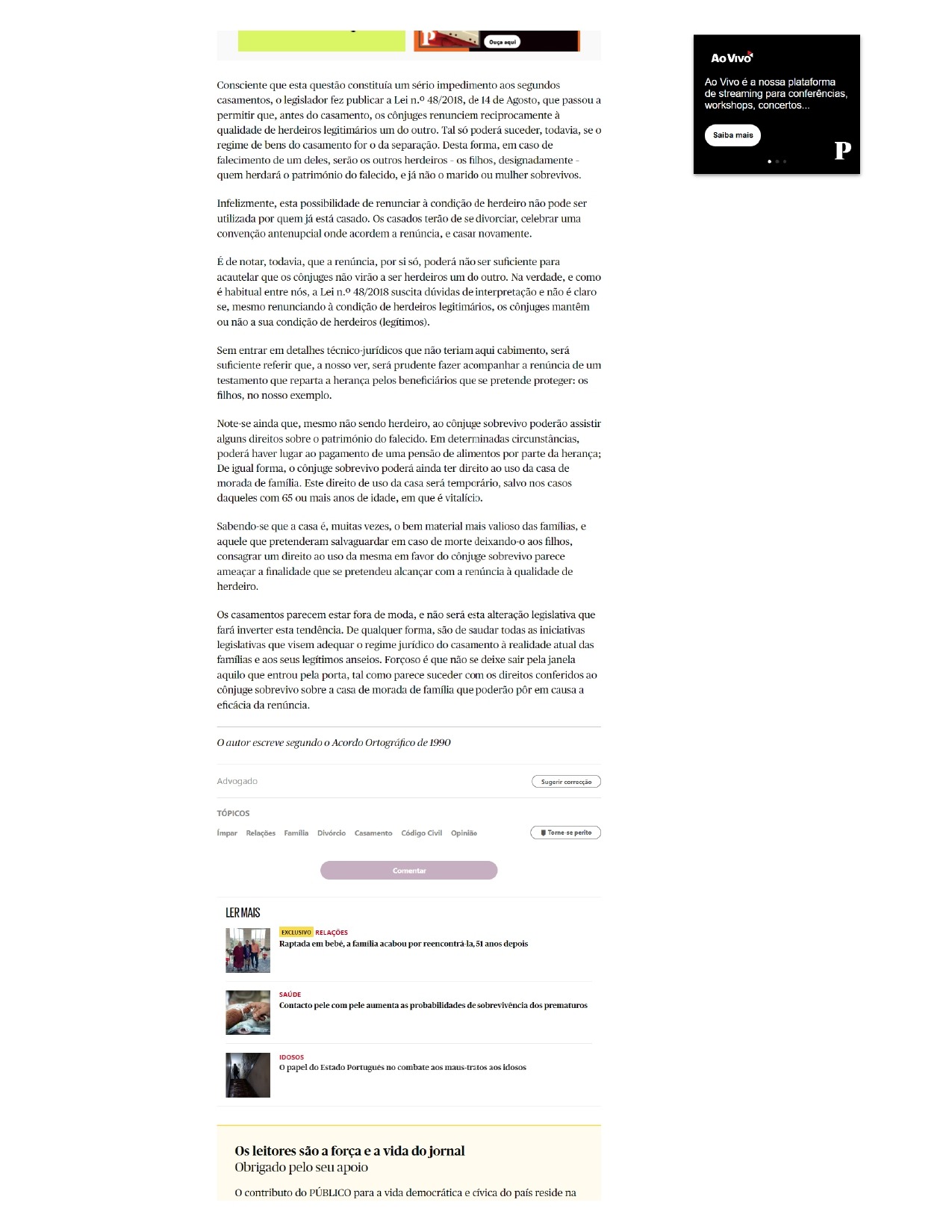