Opinion article by our coordinator in Público on 29/03/2021 entitled “Keeping your ex-spouse’s last names after divorce?”. Read the article on the Público website or the translation and pdf below:

Adopting the surname of the future husband/wife at the date of marriage seems to be falling out of favour. We don’t have any statistics to confirm this, but that’s the feeling we get from the many divorce cases that come through our office every year in which neither spouse has adopted the other’s last names.

Practices in this matter have never been uniform, and this will only be one more trend. Just note that, contrary to what one might think, it has not always been the husband’s surname that has prevailed. Many, myself included, today bear surnames that they inherited from their grandmothers or great-grandmothers.

Not adopting each other’s surnames may also mean some disbelief in the perpetuity of marriage, knowing that divorce figures in Portugal are what they are.

However, in cases where the spouses adopt their spouse’s surname, what happens in case of divorce? Can the ex-partner continue to use the surname of his/her ex-husband or ex-wife? Or must he or she abandon it instead? Contrary to what happens in the case of the death of one of the spouses, where the widow/widower keeps the right to use the deceased’s surnames, the rule in case of divorce is that the surnames fall away automatically. There may, however, be exceptions.

First of all, a former spouse may keep the surnames of his/her ex-husband or ex-wife if the latter gives formal authorization for this. This authorization may already be given at the time of the divorce. The other possibility, for cases in which the ex-partner does not give his/her consent, is to ask the court for authorization, which may be granted depending on the reasons given. And in which cases may the court authorize the use of the ex-partner’s surname(s), even against the express will of its “original holder”?

Our law does not specify the cases in which the court may grant such authorization. However, it seems common ground that such authorization may only be granted in cases in which the interested party has a serious and reasonable interest in keeping the name, such that it should override the will of the former spouse, the original holder of the surname(s). And such interest, it should be noted, may be material or merely moral.

Many people are known in professional, academic, scientific, commercial or artistic circles by their last name. And this naturally ends up fulfilling a function of recognition of those who use it. And if they cannot continue to use the name, the consequences could be severe. Think of a famous actor or writer who can no longer use the name by which he or she is universally known. It is public knowledge, for example, that singer Tina Turner reportedly paid a fabulous sum of money to her ex-husband in order to be able to continue using “Turner” after her divorce. It is in obedience to this interest that the law provides that the court may use the surname(s) even against the will of the original holder.

Of course, the former spouse who objects to the use of the name after the divorce may also have good reason to object to such use. Take, for example, surnames that are also valuable trademarks (e.g. Ford, Barbour, Siemens) and should therefore be kept in the family unit.

The court will thus have to weigh the motivations of both former spouses, knowing that there may be weighty reasons that may assist both, and make the decision that seems most equitable in light of the conflicting interests at stake.” 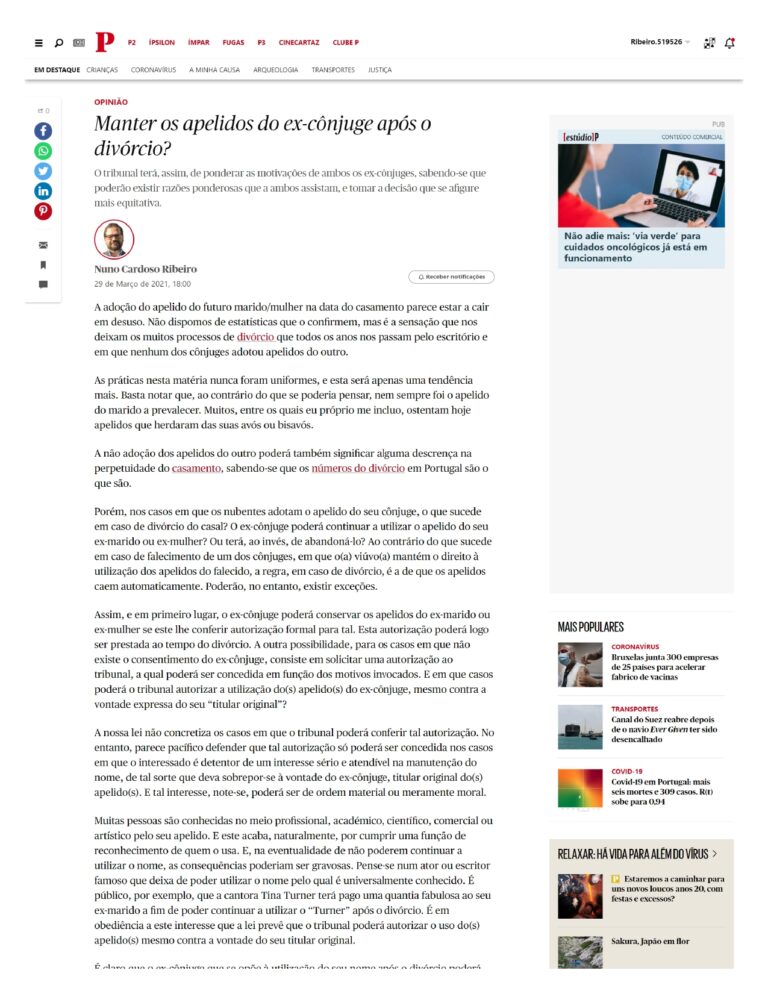